Edit
Conquests, Combat and Clams
Player versus player mechanics are always a challenge in a persistent world. Crushing the weak beneath your might – and hearing the ‘crunch-crunch’ of victory as your troops march forward – is a good feeling. Likewise, a bitter battle between two forces over a key position is thrilling and exciting, stretching your tactical strength and diplomacy.

However, being crushed, crunched or destroyed feels pretty terrible – and the worst is being kept alive while a superior aggressor repeatedly raids and farms your resources. 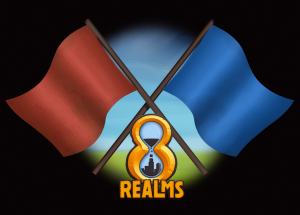 A key goal for us from day one was to solve this problem. Our chosen approach to keep things interesting was to focus on map control. So your settlements, your bases of operation, are always safe from other players – though the barbarian hordes may have a few flaming torches for those who are loose in their defence. The map contains juicy resource nodes, as well as even more valuable and limited luxuries only obtainable from the map.

As a player you can raid tiles, whittling down defences and sometimes stealing away with some quick loot. Other times you may seek to capture and secure a location, but of course that opens you to attacks from your neighbours.

Now, the more diplomatic may arrange treaties or trade agreements protecting them against military aggression, but such agreements can be broken.

We have made the decision to make a fairly complex combat system, about training melee meat, righteous ranged, mounted might, awesome artillery and agile air units. You advance your research, selecting specialist units, improving your units, and building up and maintaining your forces. The composition of your armies is as important as their size.

The exact numbers behind the combat are obscured beyond basics stats, with several subtle mechanics going on behind the scenes. This allows us to maximise the depth of the combat while reducing the chance of anyone gaming the perfect combat solutions.

Army composition is hidden from your opponents until engagement, showing only the estimated strength of an army – allowing the tricksters among you some room for feints and parries.

Some of the funniest moments for our playtesters have been the bitter back-and-forth of resource grabs and luxury looting. We have a raft of future mechanics ideas planned post-beta, including sieging, attacking wonders, seizing ancient legends and more. As always, we are working hard to shape the most interesting competitive experience, and we look forward to your input over the beta period.