Update:Blog - Back to the Start

Edit
Blog: Back to the Start

Today’s blog post begins with a small confession: We’re unhappy with the start of the game.

The collection of large images that currently welcome you into 8Realms were our way of simply introducing the game’s core features, but these were always meant to be a stop gap - ground works for the main event. When the next stage of Beta rolls around, you’ll be met with a very different 8Realms, and a very different first play experience.

In the next few paragraphs, I’m going to take you through the processes behind the design of the new 8Realms first play experience and what it means for you.

When I sat down with a blank slate to piece together the content required to capture your interest in those opening exchanges, two very important questions came to mind: What is 8Realms, and why should I play? Answering these questions effectively in the first few minutes of gameplay would be key to the success of the game’s opening experience.

The first question I attacked was Why. One aspect of 8Realms that is immediately apparent in the first couple of screens is the focus on how everything works, but there’s no indication as to why. Why am I leading this settlement? Why are there no buildings in it? Who lives in this place? What is this world? What we lacked was context and conviction. We needed to deliver you a reason to build up an empire and ground it in something more tangible than an image of what the Activity Stream does.

With the help of fellow Mods Jamie, Peter_S and Gabriel, we settled on the idea of weaving a simple narrative into the opening screens of the game. From the image below, you’ll be able to get an idea of where our minds drifted, however the final imagery will stay under wraps until it’s ready for the light of day. Don’t expect a 20 minute intro video, however (as much as we’d like to) - we’re focusing on setting the scene and allowing the gameplay to tell the rest of the story. 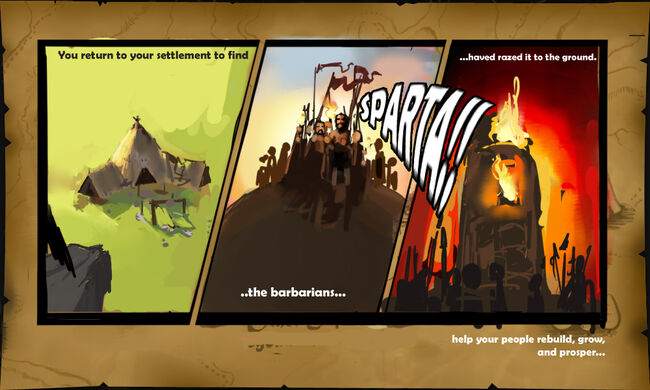 Leonidas is a new unit in the Barbarian hoards - he doesn’t like madness :D

This narrative introduction will be used to put the questions I raised above into context and begin to give you a reason to rebuild this broken empire. All these elements come together to help craft a starting experience that has greater character, context and cohesion with the rest of the game’s lore.

With the Why explored, it’s time to tackle the What. What is 8Realms? What do I do? And how do I do it? If you’ve played before, you’ll recall the set of images I spoke about earlier. All of these are being removed from our new first play experience. No longer will you need to click through lots of giant pictures of what to do. Instead, we’re breaking down the introduction of game features into a segmented experience that will see you learning through play.

As humans, we learn best through interaction, so each of the core game mechanics that you need to know to succeed will now be part of new introductory play. To do this we have created a collection of features that enable deeper interaction in the Ancient Age part of the game. These features revolve around an expansion in the functionality of the task system, an all-new feature called “highlighting”, and some fun developments to the Ancient World map. I wouldn’t want to spoil the surprise for all you veterans, so you’ll have to play to find out the details.

With a set of new features to aid first play flow, it was time to begin building an idea of how that flow would look and feel. This meant revisiting my old stomping ground – the white board. Having flashbacks of the tech tree, I constructed a sequence of events that would take you from website’s “Play” button to understanding the dynamics of Culture. The image below is the result of endless paper cuts and the death of many board pens. It is also just one of many. 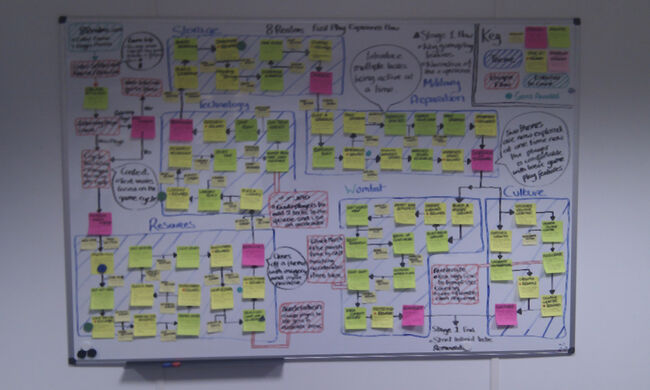 Wombat is a new mechanic that features marsupial-based warfare :D

This collection of sticky notes, arrows and boxes enabled me to visualise the entire structure of the first play experience and tweak it before a line of code had even been written. Most of the notes you can see above are in yellow and green. These are tasks, and the actions you’ll be carrying out in order to complete them - not too dissimilar to how the game currently functions. The new content lies with those little yellow fellas and their bigger, pinker brethren. These signify the use of highlights and the end of themes respectively. Highlights are a simple visual guide for players to provide an extra nudge in the right direction, while themes are something else entirely.

Themes merge the two questions I posed originally and neatly end today’s blog post. Themes are what bring together the What and the Why of 8Realms. They merge functionality with context and bring a sense of humanity to the citizens in your blossoming Settlement. We combine a collection of elements that include narrative prose, simple iconography and fluffy artwork to form a unique introduction to core game features. 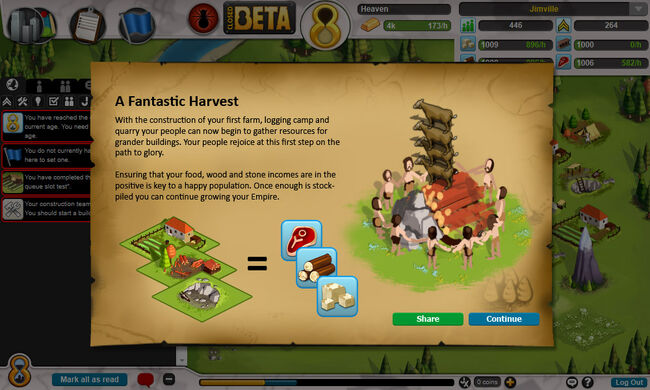 The settlers are testing the structural integrity of their cows through interpretive dance ;D

In the coming weeks we will be piecing together the last few elements that make up the 8Realms first play experience. The new features will not only help those new to the game, but all of you that have played before. It’ll be your chance to learn the perfect way to defeat the Barbarian hoards and race toward the future.

Have fun with the rest of the Closed Beta, and stay tuned for more blog action.