A salute to the 8Realms scientists!
To our 8Realms Closed Beta testers,

We at 8Realms Towers would like to raise a beaker of dangerously colourful and ominously bubbling liquid to toast your research efforts this weekend. When we set a target of 4 technologies for the weekend, we were expecting one or two of you to exceed our expectations - but this weekend's results are phenomenal! Here they are, separated by server:

Alexander is our newest server, and there are already signs that it's full of budding scientists. Not only did a whopping 1195 of you manage to research at least 4 technologies, but 14 of you exceeded 12 techs - three times as many as our target!

A special shoutout goes to Clannad, who researched 17 techs. Careful was close behind with 16 techs, but just missed out on that top spot. Here are the top stats in full:

And as a bonus, here are some stats on the most-researched topics for Alexander this weekend:

And now for Augustus, with slightly different figures as Augustus is a more established server. A very respectable 694 of you managed to research at least 4 technologies, and 13 Augustus players exceeded 15 techs!

The real standout was BigBioEmpire with - wait for it - 26 techs. Twenty six! It's not only more than six times what we were looking for, but we have to admit it was a genuinely surprising result: if anything, we expected the newer server, Alexander, to boast the higher research figures.

Empires blizzard and Evil weren't far behind BigBioEmpire, with 23 and 20 techs respectively. See the full stats for yourself:

And these were the most-researched topics on Augustus this weekend:

Lastly, we promised you all a little treat - and we won't disappoint. Here it is, not just for those of you who appear above, but for everyone who took part: an official 8Realms Flying Machine desktop wallpaper, in three sizes to suit your desktop: 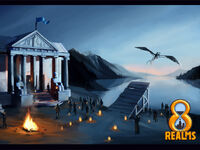 (We tried to have Mod_ThatJim model as the chap in the Flying Machine but, sadly, it turned out he's not as aerodynamic as he looks. Jim, on behalf of the 8Realms team, we'd like to wish you a speedy recovery.)

Huge thanks to everyone who took part in the weekend event, and to everyone continuing to test8Realms! Enjoy the wallpaper, keep your eyes peeled for more community events in the near future - and see you on the forums!

Retrieved from "https://8realms.fandom.com/wiki/Update:Blog_-_A_salute_to_the_8Realms_scientists!?oldid=18288"
Community content is available under CC-BY-SA unless otherwise noted.