Update:Blog - 8Realms explorers, we salute you!

Edit
8Realms explorers, we salute you!
To our 8Realms Closed Beta testers,

Having explored the landscape of weekend event stats, we at 8Realms Towers find ourselves in new, yet familiar territory - we're once again impressed and surprised by how well some of you did this weekend! This weekend's task was to capture at least 8 tiles. Let's see how you did - here are this weekend's results, separated by server:

Far and away number one was the aptly-named My Life's Journey with 83 successful captures - wow! But, as we hope you've come to expect from us, we have a few other interesting stats to mention. For example, our most pain-averse explorer was cadtastic, with 47 successful captures compared to zero unsuccessful capture attempts. Core and Imperialeros managed similarly, with success to failure ratios of 32:1 and 29:0 respectively.

'ELCONTROL3 came out on top for highest kills, with 1811 enemies slain, and close behind were Shanaria (1693) and Gods' Kingdom at 1388. We feel that honourable mentions ought to go to Holy Empire and Starzlight who, with 7 captures each and 10 and 14 failed attempts respectively, didn't quite meet our threshold of 8 captures but still put in a great effort.

Last, but of course not least, the booby prize on Alexander goes to JesusIsLord, who made 2 successful captures but lost 1787 troops in the process. Sorry, JesusIsLord - it just wasn't your weekend!

Augustus is our slightly better-established server, so the figures will look a little different. But how different? Check out the top ten:

So, not quite as different as we'd expected. ELCONTROL, you have a way of cropping up in the oddest places - like both top-ten highscores, for example! Our top explorer on Augustus was Britannian, whose 70 captures were just ten away from being ten times what we asked for! Huge congratulations to you, and to our runners-up Borundan and Middle Earth, with 70 and 61 captures respectively.

On Augustus, our highest success ratio went to Ancestral Alliance, with 33 captures to 1 failed attempt, followed close behind by Thunderdome (27:1) and KOALA KARMA (21:1). Noob managed the highest number of captures with zero failed attempts (17:0), suggesting that he or she really isn't a noob at all.

The top place for highest kills goes, unsurprisingly, to Britannian, with 4435 slain. Trailing behind slightly with 1691 and 1604 respectively were Dunkelheit and . Well done to all three of you.

The honourable mention on Augustus goes to Ja Royalty, with 987 kills over 7 successful captures, and just 2 failed attempts, making Ja Royalty the player who killed the most enemies without meeting the threshold of 8. And the Augustus booby prize goes to none other than Dunkelheit, whose 12 successful captures and 17 failed attempts saw total losses of 2170! Sorry, Dunkelheit, we'll ship an industrial-sized pack of sticking plasters out to you post-haste.

As promised, we have a new wallpaper for you! Available in three sizes to suit your monitor, here's an official 8Realms trebuchet wallpaper: 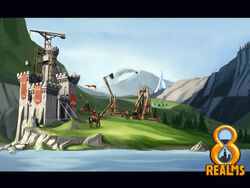 Again, huge thanks to everyone who took part in the weekend event! We're grateful to you all for continuing to test 8Realms. Next week, we're revisiting familiar territory - but more about that later on…