Through the Mountains is the fourth lore to be written. It was released on 26 Aug 2011. It can be found on the 8Realms website, here. 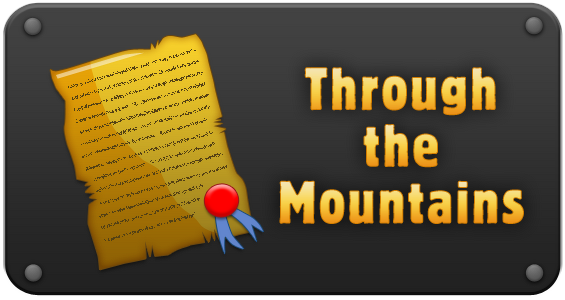 A day's march to the village, we wait, unseen, watching.

Below, on the other side of the pass, the guards of the ambushed caravan stand on a ledge in the cliff above the trail, their bows aiming down into the pine trees opposite. The lone merchant cowers behind his guards, his injured horse lying quietly below. Around him, the other abandoned horses wait, heavily laden, snorting restlessly. Next to them lie two guards, their skulls caved in, and half a dozen barbarians, pierced with arrows, bleeding into the snow.

The remaining barbarians wait, out of sight on the near slope behind pines and rocks, armed with stones and wooden clubs. The caravan guards are fewer in number, but they're better armed, and the barbarians cannot reach them.

I crawl back from the edge of the snow-capped rock and beckon to the mercenary leader, who clasps the telescope in his right hand. His men sit grimly alert, snow gathering on their armour.

"Give me the telescope. I must look closer."

The leader shakes his head. "This is ours now, along with what's left of your gold when we reach your village. As we agreed."

"The barbarians want to take the horses but the guards kill any who nears them. I need to see how many arrows the guards have left."

"What goods does the merchant carry?"

"I know what you plan, but I cannot tell. One of the packs has fallen from the merchant's horse but it remains sealed. You will not be able to reach it anyway, as there are at least a dozen barbarians, probably more, hidden in the trees. Your best chance is a reward for saving the merchant's life. You can keep my share. If we do not intervene, those men will freeze to death. Give me the telescope."

He pauses, frowning, weighing up the risks. Unsure. Then he looks up at me, nods, reaches forward, and hands me the telescope.

"Very well. What would you have us do?"

The mercenaries gather round as I mark out my plan in the snow.

We move silently down the incline to the trail, making our way from tree to tree, taking our places. We must attack the barbarians first or risk being shot by the caravan guards. I look to the mercenaries. All are ready and await my command. The cold air fills my lungs, my mouth is dry, my heart hot and beating fast underneath my new armour.

I leap from behind the tree and sprint toward the barbarian hiding amongst the rocks below me. Before he can turn I plunge the dagger deep into his back. He screams and falls to the ground; the awful sound echoes through the mountains. I raise the telescope in the air, signalling the others to attack, and they rush from the trees, setting upon the remaining barbarians in a clash of wood and metal, metal and flesh. Meanwhile, I roll the barbarian over to take his club, I see his face - and my blood freezes.

The man is from my village. His name is Adwr - the chieftain's nephew. There's a flash of recognition in his fading eyes, a faint smile flickers across his cracked lips and he whispers -

I drop to my knees and lift him. "What happened? Does the village still stand? Is anyone left?"

Adwr's eyes fade and become empty. He exhales. His death rattle ends in a deep, white silence - and I remember the words from the red book:

And the coward did accept his brother's dagger, and he did journey home to avenge the wrongs performed upon his village, and the journey was fraught with the ghosts of the slain...

I hear footsteps. A mercenary approaches, hunches down in the snow. A hand on my shoulder.