The Burning Village is the sixth lore to be written. It was released on 15 Sep 2011. It can be found on the 8Realms website, here. 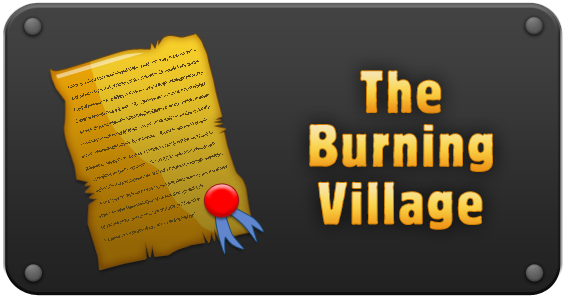 The cage is crude and wooden, yet the strength of its two dozen prisoners can't breach it — a dozen weakened men and a dozen weakened women, under the glare of the sun and of a barbarian guard.

"Heave!" — a hoarse whisper; a last attempt at brute force. We tug on the wooden bars of the cage, but they won't give. Not with our bare, tired hands.

Father's head is bowed. From heat or shame, I don't know. When he looks at me, it's not with pain, but sadness. Was it my betrayal that led to the fall of my village? Would our village have prevailed had there been one more hand in the battle?

"Heave!" I repeat, louder. The cage budges slightly, but doesn't give. The guard turns, stares, returns to carving in a rock — with my dagger.

"Heave!" and the cage budges more.

"HEAVE!" and there's the creak of wood.

The shouting attracts the attention of the barbarian woman. She emerges from the barbarians' tent, now wearing my broken telescope as a crude necklace, and approaches the cage cautiously.

I glare at her, wordlessly. Then I have an idea.

I need her to move closer to the cage. I lower my voice and mumble, too quiet to hear.

"I'm hoarse. Come closer. Give me your ear."

She approaches the cage, presses her ear between the bars and whispers, excited —

"Tell me! What does the magic eye show?"

There's a spark in the barbarian's eyes as she lifts the telescope to her face, peers into it — and points it directly into the glare of the sun.

And before she can drop the telescope, I snatch it from her grasp, slip it around her neck and pin her to the wooden bars of the cage. I fight against her barbarian strength as she struggles, and she strains to yell —

Dazed from his nap, the guard grabs his club and rushes to the cage, club in one hand and dagger in the other. He barks and grunts as frantic blows rain down on the bars of the cage. Two blows, three, and on his fourth a bar gives way — and then another — and the woman is free. She falls to the ground, unconscious, and the guard starts to raise his club once more. This time, I'm the target.

As the guard lifts the heavy club above his head, I rush from the cage to tackle him. Startled, he lets go of the weapon and thrusts both tree-trunk arms out to protect himself. There's a look of genuine surprise on his face as the falling club makes contact with his skull. He falls to his knees, dazed. A moment later, he's out cold. I snatch the club and dagger from him, turn to the cage —

"Merion!" I toss the club to my brother.

And as I stand triumphant before my brothers, my friends, my Father, I raise the dagger high above my head.

On my signal, the men and women of my village rush from the gap in the cage. From the ground, they pluck whatever make-do weapons they can find. Stones, discarded spears, primitive barbarian axes.

In the glare of the sun, in the heat of the burning village, a dozen men and a dozen women — mere farmers, woodcutters, masons — quickly and silently take their positions around the barbarians' tent.

And I give the second signal.

Retrieved from "https://8realms.fandom.com/wiki/The_Burning_Village_Pt._2?oldid=16528"
Community content is available under CC-BY-SA unless otherwise noted.