The Burning Village is the fifth lore to be written. It was released on 02 Sep 2011. It can be found on the 8Realms website, here. 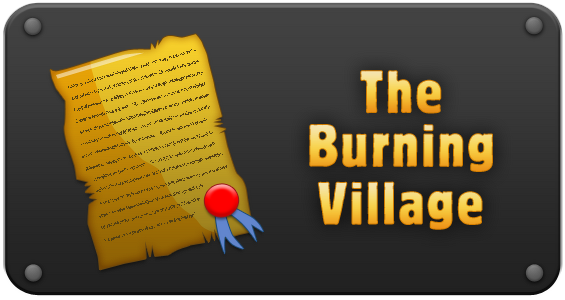 The farms burn. Our cows are dead, their carcasses scattered where they fell. I stumble into a pike on which the village wiseman's head gapes, his eyes reflecting the last few moments of horror before —

And where the village centre used to be, there's a wooden cage. In the cage, people I know; people I grew up with. But not all of them. And Father's there! And my brothers, waving furiously, motioning me to turn around and leave — am I that hated by my own family?

Armed barbarians patrol the cage. Across the way, I see a sheepskin-clad barbarian chief; a giant of a man. A crude grass cap adorns his balding head, bobbing as he talks with a woman barbarian.

What has happened to my village? The cows — the fire — my family, kept as prisoners. Where are my mercenaries? I turn round to call for them — and that's when my skull explodes with pain.

When I wake, my wrists and ankles are bound crudely but tight. Pain, heat — and when I open my eyes, the chief towers over me, my bloodied knapsack lying open at his feet.

The woman turns sharply and glares. "He said not to tell the soldier he had come. He'll be displeased. He won't buy."

"Enough!" the chief snaps. "He'll buy. Or…" The chief motions towards the cage. He regains his composure and yells, "CARRY SLAVE! COME!"

A twitchy, thin child appears from behind the man.

"Hungry?" the barbarian asks me. I haven't eaten for a day; it's all I can do to nod meekly.

The boy called Carry Slave scuttles away, and returns with a sliver of half-cooked meat.

"Eat," commands the chief. I chew the meagre meat twice and swallow it whole.

"He's too thin," says the woman. "The man won't buy if he's too thin. He's already complained the others were thin."

"This one is special," replies the chief, bluntly. "CARRY SLAVE! MORE FOOD!"

"Buy?" I ask, "What do you mean, 'buy'?" My strength is starting to return. I can almost think clearly now.

"Eat, soldier," he replies, as Carry Slave hands me another sliver of meat. "We have all of you now. He will be here tomorrow, and you will — "

The barbarian snarls at the interruption. "You will be sold, sold-ier. Your people, too. We will be rich, and this village will be ours. We were only waiting for your return."

"What's so special about this one, anyway?" asks the woman. She scans my knapsack, notices the telescope poking out. Curious, she snatches it, holds it up to examine, grins…

And all is black once more.