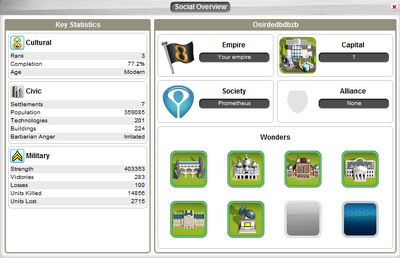 The Social Overview is a display in game, showing your Key Statistics in three categories, Culture, Civic, and Military . For Culture these are Rank on server, Completion percentage, and Realm Age. For Civic these are number of Settlements, total Population, total number of Technologies researched, total number of Buildings, and Barbarian Anger level. For Military these are total Military Strength, Victories, Losses, total units killed, and total units lost. There is also a section listing your Empire Name and Flag, Capital Name, Society allegiance, Alliance standing (still to be implemented), and Wonders you have built. Mostly, this display is consulted to determine exact ranking, as the Elite Board rankings are somewhat delayed, and for kill/death and win/loss ratios.

This display also opens in a slightly different format, when the View Profile option is selected on an Empire's name. This display compares some Key Statistics from the personal display, but not all, and shows the compared number of garrisons each empire holds at that time. The wonders and flag shown on this display are the ones belonging to the other empire. It also displays the Relationship Bar, showing how you and that empire are getting along with each other, with a gift box at the 'Like' end, and flames at the 'Dislike' end. This display is affected by trading with each other (to move counter toward 'Like') and battles with each other (to move counter toward 'Dislike').