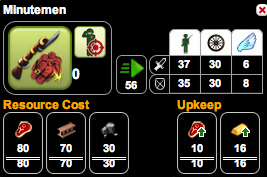 Minutemen can be supported by Grenadiers for extra damage.

They otherwise have no variants.

They have an elite version called Minutemen+.

Minutemen were introduced into the game after the Beta release and reuse their icon. They would have had the highest research requirement along with Grenaders with a Level 7 University.