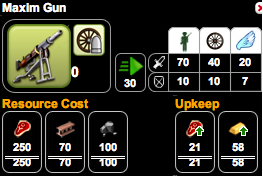 As with all artillery, they have high attack ratings against infantry, vehicles and planes, but their low defense requires escorting defenders.

Their relatively inexpensive costs make them the first choice for artillery throughout the end of the game, especially as they have an upkeep cost in food, making them much more efficient than later units; but they are untrainable past the Modern Age. Their obsoletion leads to the Future Rail Gun .