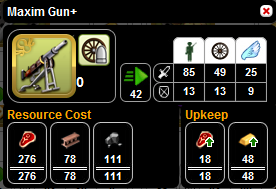 Maxim gun+ is a stand alone (non variant) artillery unit that can be researched late in the Imperial Age. This unit, although cheaper to maintain and build than a Cannon, is much faster than that unit, making it a viable attack weapon for short distances.

Be aware the stats shown are for the Elite version, which is typically about 40% better than the regular version for att/def, and speed, and has reduced upkeep costs, with higher build costs than the Maxim gun.

Retrieved from "https://8realms.fandom.com/wiki/Maxim_Gun%2B_(Unit)?oldid=18279"
Community content is available under CC-BY-SA unless otherwise noted.