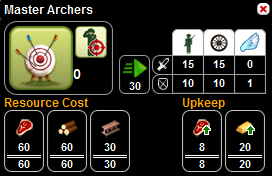 Master Archers are heavy ranged units, functioning as anti-siege Feudal Age and are capable, but also cost substantially more gold upkeep than the other ranged family, Longbowmen and Agincourt bowman. They are mostly useless due to their lack of targets and inefficient upkeep.

It is preferential to use a Longbowmen force in virtually every situation. For the cost of a single MA, three LBs could be maintained.

Their main purpose is their extra vehicle damage; however, ranged may only fire on siege units when the artillery is defensless. This would allow them to dispose of more enemy siege units and artillery, such as Catapults (Unit), per volley. Due to the lack of vehicle targets, this makes them almost useless.

They are the counterpart of the Classical Flaming Archers , and become obsolete in the Imperial Age.

In the Closed Beta, they required the Master Archer technology to use and could be improved by Bowmanship.

Retrieved from "https://8realms.fandom.com/wiki/Master_Archers_(Unit)?oldid=23163"
Community content is available under CC-BY-SA unless otherwise noted.