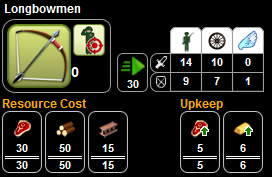 Longbowmen are the main ranged unit in Feudal Age.

Highly effective units, they fire upon enemy infantry to thin their numbers. Archers tend to fire upon enemy archers (skirmishing), and it is usually recommendable to support your armies with some even if you do not intend on using them as your primary force.

Notably, their speed is similar to the Pikemen that they support, so they won't slow down the marching process like Classical's Archer unit.

Their upgrade increases their attack power while defending ("garrisoned").

The most useful of the two variants is the Agincourt Bowmen, as an anti-archer skirmisher that will supplement your line's defensive and staying capability. Standard Longbowmen should make up the rest of your forces.

They have two variants:

They become obsolete in the Imperial Age, replaced by Crossbowmen

Retrieved from "https://8realms.fandom.com/wiki/Longbowmen_(Unit)?oldid=23149"
Community content is available under CC-BY-SA unless otherwise noted.