Into the Night is the third lore to be written. It was released on 11 Aug 2011. It can be found on the 8Realms website, here. 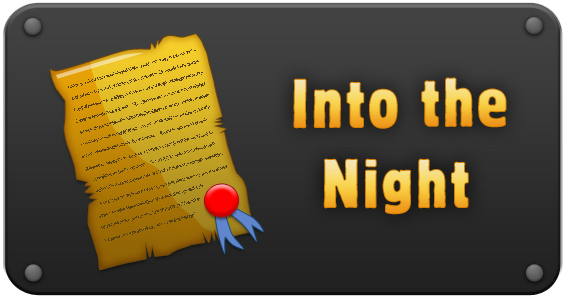 The sun is setting by the time we reach the inn, and the bar is full of life.

"Drink," says the barman; more a command than an offer. "Anything you like," he adds, "On the house."

On the house? I stare, taken aback, and the barman half smiles.

After my third swig, my head is starting to throb. It's only when the bazaar trader strides into the inn that I realise his boy has been watching from the door since I arrived. The trader sidles alongside me and sits, his boy waiting patiently outside.

I tense up, and the trader senses it.

The glass is still nearly full. I take another cautious sip, and the trader's expression softens. He lifts a bulging purse out of his pocket, and raises it to eye level.

"We've been good to you, stranger. I've been sent to ask something in return. I've come to do a little trade."

A horse whinnies outside, a whip cracks, and the trader's boy dashes into the bar -

Incensed, the trader springs from his seat and runs after the boy; his purse thuds onto the floor. I bend down to pick it up, and as my hand clasps around it -

"You can keep it," says a new, deeper voice.

I look up to a large, stern-faced monster of a man; his dark eyes like two great shadows on his face. "You can keep it. But you have something I need. And in return, I have information."

Information? I'm a spearman; what could I possibly -

"Give me the telescope."

"Open your knapsack and hand me the telescope. Then we'll be friends. And you need friends. Especially friends with my information."

There's a flash of impatience in his eyes; he grabs my knapsack - opens it - pulls out the metal cylinder.

"Tel-e-scope," he enunciates, as if I'm stupid. He drops the telescope into his pocket and returns my knapsack.

"You have a long journey ahead of you, friend," he continues. He takes a small, red book from his pocket and begins to read:

The village did burn.

"The journey will not be kind to you, coward," begins the man. He hands me a dagger - a strange insignia on the handle - and continues to read:

"And the coward did accept his brother's dagger, and he did journey home to avenge the wrongs performed upon his village, and the journey was fraught with the ghosts of the slain, yet with the aid of his brother he did - "

My courage bolstered by drink, I hold out my palm to silence the man. I speak slowly, deliberately:

"Stranger, I'm not your brother."

The man sneers. He raises his voice, "And so it came to pass that the coward - "

I knock the man's book from his hand and point the dagger into his face. The colour drains from his cheeks, and he watches, silent, still, as I reach into his pocket and take back the telescope.

As I leave the inn, I half-imagine the smell of smoke in the air.