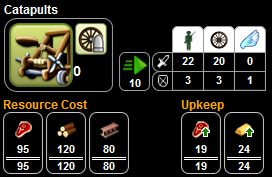 Catapults are a Feudal siege unit. Due to their low speed, they are not very useful; especially for tiles slightly further away. It is better to use Pikemen and Longbowmen for raiding and capturing. They are improved by Incendiary Missiles. They have a faster, weaker variant called Mangonel and a slower, stronger variant called Onager. Barbarians have variants called Siege Engines. They become obsolete in the Imperial Age.

Retrieved from "https://8realms.fandom.com/wiki/Catapults_(Unit)?oldid=23094"
Community content is available under CC-BY-SA unless otherwise noted.