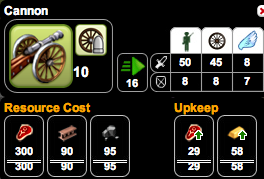 Cannons are the first artillery unit you can research in Imperial Age. They are improved by Mortars. They have a faster but weaker variant called a Falconet, and a stronger, slower variant called Long gun. Barbarians have their own variants called Sakers. They become obsolete in the Modern Age. This is the first gunpowder-based artillery unit, excluding the Bombadiers.