Attacking a map tile in a raid or capture order initiates combat, where your army engages the occupying force in battle. A raid will make a an assault until one side is eliminated, but if a capture was ordered, the winners holds tile control and recieves its resources. Often attacks on map tiles are initiated for these resource benefits; enormous production rates delivered to the occupant's town, or with Luxuries such as jewelry, precious metals/gems, and exotic crops, which generate culture.

Once you have reached the Classical Age, and you have built your parade ground, at town with some military units you can go to the map, select a tile, and initiate an attack - raid or capture. 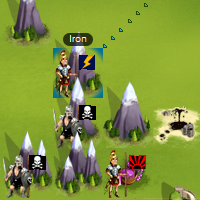 These tiles will most likely have an occupying force (always barbarian, unless specified with a player flag) occupying the tile. Their forces are given a force rating (equivalent to the players' ratings) in relation to the strength of their occupying army. You will need to send an army of at the very least is equal or greater value to raid/capture that tile. It is, however, important to note that the Army value is not the only factor to consider when attacking, but it is the only factor you have to estimate the strength of an opposing army until you attack them.

Before you can capture a tile your army will have to march there. They will take the shortest route possible and they cannot be attacked on their way there. You can lessen the time spent marching by building a Watchtower or researching technologies such as Agile Boots.

See battling for more information. Typically, fighting is done simultaneously - a wave of a range (vehicle, projectile, melee, siege) attacks, both sides "shoot" at the same time, units are removed, and then the next range/round fires.

On most attacks, there is usually a minimum of losses you can take. This can influence how many units you send on attack.

0 Losses is nearIy impossible as in every round, the enemy's groups will fire as yours do. There is one exception where they lack a units of a certain range (no archers, all melee vs massed archers - the archers shoot first and could eliminate all melee in one volley/wave, before the melee wave can attack).

You can, however, reduce these losses to 1-volley of attacks by eliminating everything they have in one round, however this is often unreasonable.

The most likely is that after the first wave, more of the enemy units will be dead and unable to counterattack. There are less units able to kill your units, so this rapid This ends up enabling you to win as it repeats for each round (albeit taking casualties, proportional to the difference/outnumbering).

Mechanically, assuming the pre-release battle mechanics are still the same, with simultaneous firing, as not all units can one-shot other armies, massive forces can sometimes weaken the losses you take over multiple rounds in this fashion by denying a second wave, often when the unit defending has defensive power greater than their attacker's power (this means, in an equal-number engagement, two units will be required to kill one of yours, thus multiple rounds are required to kill off all your units).

Once they have captured the tile, a soldier holding your flag will be placed over the tile to show other players that you have captured the resource and that they can't capture it without killing your army.The resources are part of the production of the mission's city/base once you have captured them, and will stay there untill they have been either killed or ordered to return. That means it's good investment to reinforce contested tiles, if you want to keep your spoils intact on-calendar.

Raiding is very similar to capturing the tiles, the only difference being that after the battle, if you're the victor, you army won't 'stay' on the tile, instead, they will return to the settlement they were dispatched from with bunch of resources that they obtained from the tile they raided.

A good way of raiding a tile is to run air-strikes (air units without land-support) on that tile. Air-strikes can be extremely fatal if the opponent army hasn't got units that can counter flying units.