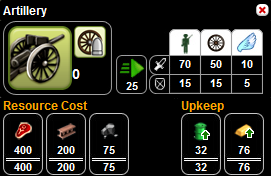 Artillery are large siege/artillery units in the Industrial Age.

A new aspect of these units is that from the Imperial Age, siege vehicle upkeep starts to costs Oil instead of food.

They have a stronger version called a Field gun and slower variant more effective against vehicles & air units called a Howitzer. Barbarians use versions called 25 Pounders.

They required an Army fort (Building), a Factory (Building), Gunsmith (Building) and an Academy (Building) to be trained, although these requirements may have been simplified in the pre-release version of the game.

They are improved with Explosive shells. They become obsolete in the Future Age. They have an elite version called Artillery+ .

Retrieved from "https://8realms.fandom.com/wiki/Artillery_(Unit)?oldid=23187"
Community content is available under CC-BY-SA unless otherwise noted.