A Stranger in the Village

A Stranger in the Village is the first lore to be written. It was released on 13 May 2011. It can be on the 8Realms website, here. 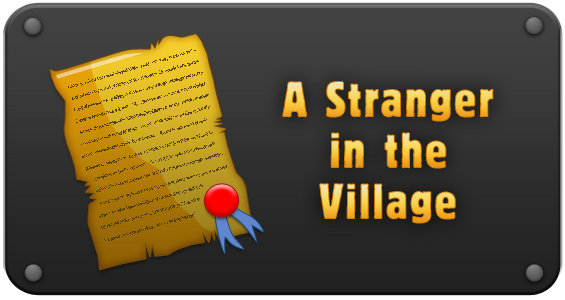 The sun begins to set over the village. I can't go back. I'm a stranger now, after the fight, after my betrayal. I steady myself with my broken spear, haul my knapsack over my shoulder. Then I see him.

The child stops, scoops something from the moss at his feet. He glances thoughtfully at the broken spearhead, then drops quickly to his knees and pulls some kind of cylinder from his knapsack.

I take cover behind the fallen tree, momentarily blinded by the sharp glint from the cylinder. I strain through impaired eyes to make out the boy.

The child grips the strange cylinder in one hand, and with the other he takes chalk and a slate from his knapsack. He turns to face the village, guides one end of the cylinder to his eye, and starts to scratch quick, precise symbols on the slate.

Counting - is he counting?

Without warning the child stops, turns to me, stares. He directs the cylinder at my face, and I see it properly for the first time. The length of the cylinder is a smooth, yellow metal, but the end - the end is an eye - a black eye, like a fish eye under water, pointed directly at me - and I freeze in place. Still peering through the cylinder, the child opens his free eye, and I feel his gaze travel over my face, my hair. He pauses on what's left of my helmet after the skirmish, and he frowns. The boy's pale blue eye seems heavy with wisdom beyond his years - he's scanning me; analysing me, and I - what - afraid of a child?

No - not the child alone. Afraid of that metal cylinder. That alien object he holds.

The boy lowers the cylinder, scribbles a final figure upon his slate, scrapes two conclusive lines above and below. He's finished. He slips the slate and chalk back into his knapsack, flashes one last glance - a warning? - and walks away. Slowly. He's not afraid of me.

With eyes dazzled by the setting sun and a mind clouded by - curiosity? fear? - I take a few unsteady steps, pick up the orphaned spearhead, reunite it with my spear.

And I begin to follow the footprints of the child with the metal eye.

A soldier encounters a child with a telescope-like object. As the soldier does not recognize the object, the child seems to be from a more advanced culture.